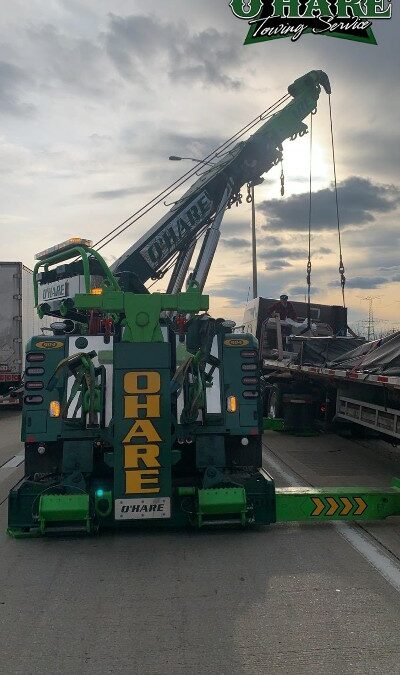 O’Hare Towing recently responded to a unique load shift correction job on the westbound I-80 in Joliet, IL. A customer was driving on the westbound lane when he witnessed a shocking crash between a truck trailer that was hauling cattle and another vehicle.

16 of the 33 cattle ended up on the road and upon witnessing the scene, the customer locked up his brakes. His sudden reaction made the steel coils he was transporting slide toward the cab of the truck.

Did you know that load shifts are one of the leading causes of truck rollovers in the US? They can be extremely dangerous and can cause even the most experienced of drivers to lose control. Thankfully, the driver was uninjured. However, in order to be able to complete his journey, he needed a quick load shift correction and the assistance of the towing company.

Despite the chaos around them on the eastbound lane, the expert heavy towing team were able to successfully complete the job. They used their heavy towing equipment to secure the steel coils, lift them in the air, and place them in the correct position.

Unfortunately, in order to do this, they needed to close one lane so that their rotator could safely work. Talk about the cherry on top of the cake when you think of the cattle blocking traffic as well!

Big thanks to the O’Hare crew for their quick response and professional and reliable service! Great job, team!

O’Hare Towing recently responded to a load shift correction job on the westbound I-80 in Joliet, IL. Load shifts are known to be one of the leading causes of truck rollovers in the US. They can be extremely dangerous and cause even the most experienced of drivers to lose control.

The call for a load shift correction was linked to an unfortunate incident that occured on the eastbound lane that Tuesday afternoon.

A truck driver who was under the influence of drugs crashed into another vehicle. The truck’s trailer had 33 cattle on board and due to the crash, 16 of them ended up on the expressway. The Eastbound lane was shut down for hours and the incident caused a massive backup on the expressway.

The customer that rang O’Hare Towing for a load shift correction had been driving down the Westbound lane when the incident occured. He witnessed the incident and it caused him to lock up his brakes. His reaction led to a load shift, as his sudden braking made the steel coils slide further toward the cabs of the truck.

The towing crew responded quickly and left their headquarters to help with this load shift correction. Upon arriving at the scene, they assessed the situation and decided upon the best course of action for the load shift correction. The team decided to close down one lane in order to safely complete the job. 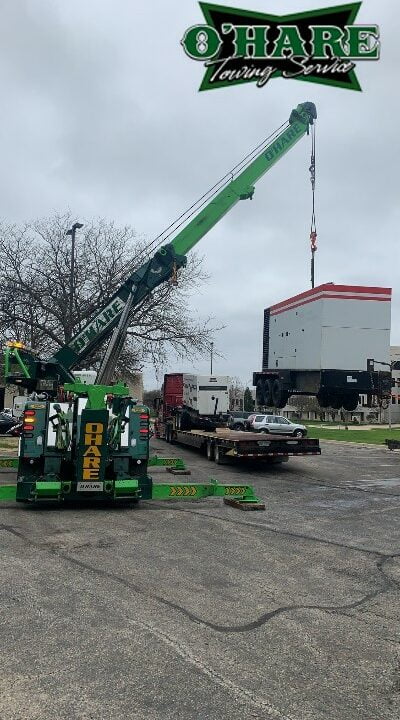