O’Hare Towing’s heavy tow truck division responded to a call on I-88 westbound in Downers Grove, IL. A tractor trailer was delivering 10,000lb of miscellaneous tools to a local hardware shop. As the driver was making his way down the interstate, the sound of honking began to drown out his radio.

The truck driver glanced in his side mirrors and was met with a terrifying sight … flames! One of his wheel hubs had caught on fire! Thankfully, he caught the fire early and was able to safely pull over onto the shoulder of the interstate.

While the fire was quickly extinguished, the wheel was completely destroyed. O’Hare’s heavy tow truck team made their way to the accident site with a rotator and a heavy wrecker. The rotator operator lifted the trailer in the air, allowing his colleagues to remove the remains of the wheel.

With the wheel out of the way, the team chained up the axle so it would not fall and drag on the road during the tow. With the trailer secure, the heavy tow truck team towed it to the owner’s designated repair facility.

Great work out there team! Your efficient work helped avoid a traffic nightmare on the interstate!

The team then strapped the axle so that it would not drag on the ground during their towing process. With the trailer prepped, the heavy tow truck team backed up their wrecker towards the front of the trailer.

Hooking onto the kingpin on the fifth wheel plate, the heavy towing team was able to easily hook onto the trailer. The heavy towing company did one final security check prior to towing the trailer off of the shoulder of the road.

The heavy towing team made sure to clean their heavy wrecker and rotator in order to be ready for the next client! 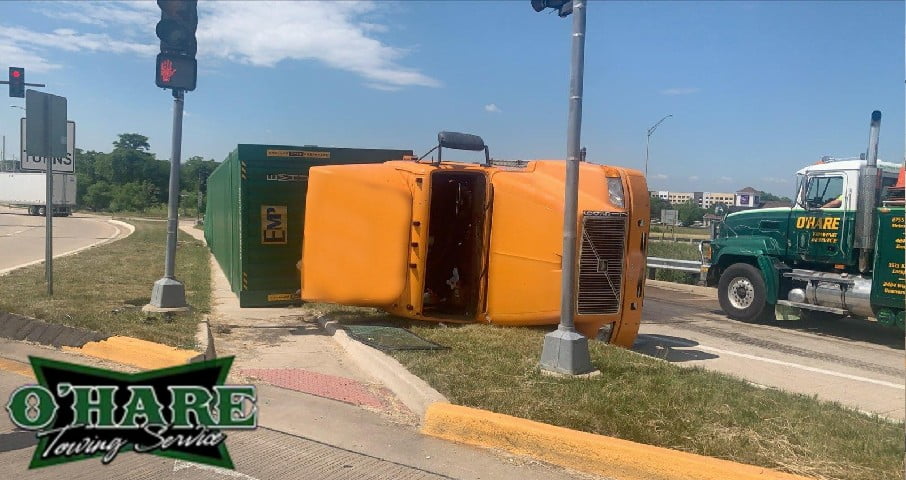